The career fan was developed in a participatory process involving male and female scientists. It sharpens and defines the career paths and target positions that enable permanent employment at KIT for young scientists. 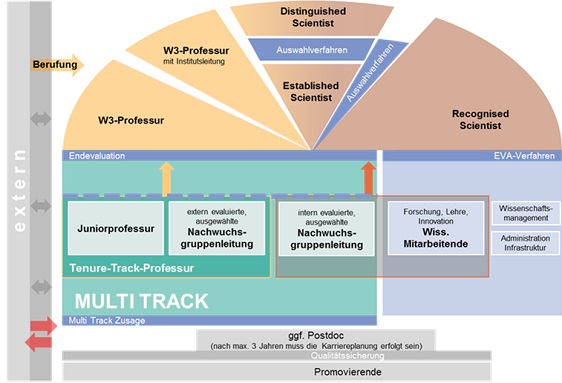 Figure: Career subjects at KIT with a focus on Multi Track.

After a successful doctorate, further career planning takes place within the framework of the annual staff meetings in the postdoc phase within the first three years. At KIT, two career goals can be pursued:

Career goals are achieved in different ways within KIT:

Both commitments are subject to a positive evaluation.

The entry requirement is success in one of the following positions:

In addition to the opportunities presented here for pursuing a plannable scientific career at KIT, there are junior professorships and junior research group leaders without tenure or multi-track as well as temporary habilitation positions. These have the goal of a professorship or other activity outside KIT. KIT thus fulfills its task of qualifying outstanding scientists not only for its own institution, but also for other universities and other research institutions.